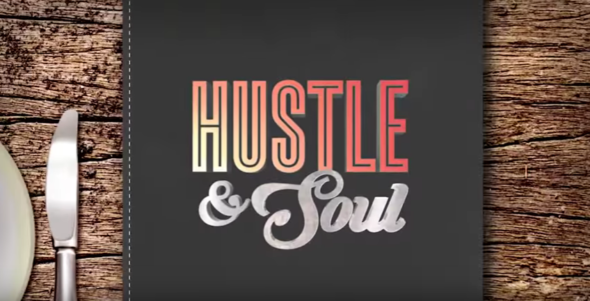 “Can somebody please turn off the heat, because it’s flamming in this kitchen! If you can’t stand the heat, stay out of the kitchen!”

Whew! The new season of Hustle and Soul is Flamming sky high and has officially broke the thermometer!  The Pink Tea Cup located in Brooklyn, New York is ran by Lawrence which is the Owner and CEO and it’s lovely staff, Ana, Thandi, the twins Dominic and Stefen, Sana and now the new bartender, Cola.  Besides the great food and hospitality, the drama is very public at the popular restaurant and everyone can feel the heat front and center.  It’s like sitting in the audience at the Jerry Springer show because you never know when a fight is about to break out.  But the drama has still rolled over to the new season and Lawrence has gotten himself into a bit of a love triangle I should say.  Okay so Ana is the “baby mama” of their son and has been together for about seven years.  Seven long years of staying together and not married. That’s the question I would like to know, “Why didn’t Lawrence pop the question since they already acting like husband and wife?”  The ladies must really love Lawrence because the now floor manager and once general manager has a thing for him and it’s more besides business.  Ana took her in when Thandi didn’t have anywhere else to stay and she was actually the one that brought her to the Pink Tea Cup to work!  Sounds like pure betrayal to me and now she’s after Lawrence for good.  I want to know why Lawrence couldn’t committ to Ana long enough so none of the nonsense didn’t have to happen.

Like the saying goes, you can’t mix business and pleasure and that is exactly what Lawrence is doing.  He got these ladies all sprunged, especially Thandi.  I mean that’s Ana’s ex, but she is still the baby mama with more power.  Ana and Thandi never really got along for some reason at the Pink Tea cup because Thandi felt some type of way.  Maybe she wanted what Ana has, even Lawrence.  Last season when Candice (former bartender) was working there, her and Lawrence got into a huge arguement and Candice broke a lot of the glasses at the bar.  That was a very hard time for Lawrence and Thandi hung around claiming she would always be there for Lawrence.  He was crying and all and laid on Thandi’s chest for comfort.  I guess Thandi used that moment and ran with it because now she already done told Ana that her and Lawrence are a couple who apparently is sleeping together. Yes, he admitted that to Ana when he moved out of their place.  He really is in the dog house for sure and has dug a deeper hole for his grave.  Of course Ana did leave the Pink Tea Cup last season, but guess what?  She gave it some thought and is now back there and yes she took Thandi’s position as the General Manager; she took it back right from under her nose.  So now Thandi is back to being floor manager.  The expression on her face was PRICELESS! You sleeping with Ana’s ex knowing that they have a son together and you still don’t care?  I don’t feel sorry for Thandi at all from this point on!  She has no respect for Ana whatsoever.

Lawrence did admitted to Ana that he wants his family back.  What do yall think? Should Ana take him back and try to work things out after all?  I’m just not sure if Thandi’s heart and soul can take it if they ever got back together, but it’s really not her decision to make that call.  A girl got to learn how to stay in her lane for real.  But when Ana holds her first staff meeting after coming back and regaining her position as GM, I could feel that Thandi felt threatned and insulted.  Now Candice on the other hand did get fired from the Pink Tea Cup because of the incident last season and was working at another bar.  Sana and Candice were extremely close while working together and decides to pay Candice a little visit to see if she would consider coming back to the restaurant.  The twins has something up their sleeves trying to get Candice and Lawrence to sit down and talk one-on-one by telling both Candice and Lawrence that they wanted to apologize.  Although it was a big set-up, they eventually talked it out and both of them apologized. Now as far as Candice coming back to the restaurant, that’s going to add more drama on top of the old drama because Ana doesn’t like her.

If you watched the first season of Hustle and Soul, then you know Lawrence is big for surprises.  He always has something up his sleeve.  But this surprise will blow everyone away!  The big surprise everyone at The Pink Teacup has been waiting for is…….*drum roll please*……..The new Pink Teacup in MIAMI!!!! That’s right, there will be a second restaurant on the beach!  And guess who will be the owner of it? It’s ANA!  That was always her dream to own her own restaurant in Miami.  Way to go Lawrence making boss moves!  And that means Thandi will be running the one in Brooklyn.  So if Ana is in Miami, that means no more drama…for now.  But I’m curious though, will this be a good idea since Lawrence is in love with both Thandi and Ana?  Or should he just choose which restaurant to stick with? Honestly I thought it was a proposal all-white affair.  Oh well, Ana was very happy and I haven’t seen her that happy all last season long.  She deserves it!  But why is the new bartender Coca saying that Lawrence will be having different hoes in different area codes? Lol, lawd she’s a mess already.

So Lawrence thought it would be a good idea for both Ana and Candice to meet up to hash things out since they both had a lot of drama.  I’m not sure about the social media beef they had going on about Ana’s son, but Ana was really heated by that.  They didn’t have much of a conversation, because next thing you know, Ana done ran up on Candice and popped her on the face..the end!  OMG! Ana done put them paws on Candice.  Until next Thursday catch a new recap on what happened with Ana and Candice and will Candice be considering working at the Pink Teacup after all?

Tune in every Thursdays on WE TV at 10 PM for new episodes of Hustle and Soul and read new and juicy recaps only on That Riverz Gurl Media Entertainment News.

You Tube Video courtesy of WE TV